I thought I would jump on here, really quick, and tell you about my latest adventure at the Drive-In. Kara is sick and sleeping. She went to the doctor today and I think she will be all right, but I can’t help but be worried. She is drinking lots of fuzzy water and reading this book she can’t stop talking about called The Shadow of the Wind. She thinks she read it when it originally was translated, but is enjoying the heck out of it again. She really loves her books. I’m more of a newspaper guy. Kara loves news too, another reason why we get along so very well. She could wake up at any time, so I have to type fast, which is not easy with these paws.So I went to see Ted, which is about a T. bear like me, only he talks a lot and is a blonde! Eww! He is also very lewd and crude. He smokes marijuanna, drinks heavily and likes strippers. I think the world does not need to see this kind of teddy bear. He is not a good example at all. Dave and Kara had to cover my eyes quite a few times. I think that was when there were lots of girls around Ted. What kind of bear needs the love of that many women? Just disgusting. The only cool thing he did was drive. I would really love to try that some time soon. Hey, I may look like a badass on the outside, but on the inside I am kind, moral, and proper. You know, I can beat you up, but only if you get in my face first. I would never make provoking comments like Ted. I was unhappy and disappointed that Kara laughed at some of the things that he did. What got into that girl during that movie? (Well, that line that Ted’s girl Jamie Lyn delivered threatening a guy never to step foot in Quincy was pretty funny. She was definitely Quincy material, a very similar temperament to one of Kara’s college roommates.) I thought Kara and I were cut from the same fur? Sheesh.

Maybe I am taking this movie a bit too seriously. It is a comedy after all. It is pretty original, I guess, to have a talking teddy bear on the silver screen. Maybe it is just a Yankees/ Red Sox thing, you know. The movie takes place in Boston and I just don’t understand the culture sometimes. Admittedly, I do have a bit of the Bronx in me. One may even say, I have a Bronx accent and I feel like a “good fellas” type of vibe. This makes a strong bear when I need to be, a great bodyguard for Kara and passionate about people and food. I’m loyal. I would lay down in traffic for Kara. I’m not all business, I like to have fun too. I love to write, exercise, hit the yoga mat and spin around on the fan once in a while when I am feeling frisky. I guess what is important to this bear is to take care of himself, so you can take care of the human that is in your trust. I want to give other bears, humans, and creatures the knowledge that taking care of yourself is important. I also want to promote good clean fun. Who wants to wake up the next day and not feel well. I like to wake up in the morning and dance!

Well, enough about the movie. I mean, yes it was good, but less vulgar next time Seth MacFarlane. What was unbelievably cool was going to the drive-in. What an experience! There were treats of all kinds, Popcorn, crab cakes, fried food fun and candy candy candy. Food Food Food. I also got to discover this great beverage called frozen lemonade made by a company called Del’s. Kara is always talking about Del’s. She loves it. I sat in the backseat for a bit and then once Kara finished her dinner, she let me sit on her lap so I could see better. I was glad I was a bear when it came to the bathroom because the lines were long. I sat in the car with Dave while Kara went to the ladies room. She waited in a long line. Dave and I traded stories about Kara and our favorite dance moves. I was surprised to find that Dave wasn’t much of a dancer. He loves music so much, what gives? Who doesn’t like to get down to some vintage Madonna or Britney once in a while? Come on! Needless to say I enjoyed the music that the drive-in theater played through the radio before the movie began. It was neat to watch all the other people in their cars and all the kids running around. Such summery fun! It was a great night.

After the movie we went back to Dave’s place. He has a cool apartment. He took me on a tour of all the rooms. I think he would be a good realtor of tour guide. I really like what he had to say about his home. I spent the night on the couch. It is very comfortable. I can understand why Kara, upon the second time she met him, fell asleep because she was so comfortable on that couch and in his company. What a good guy! Very hospitable.

I had some other outings in the last few weeks. I went back to Duxbury and hung out there. That was great. Love to sneak down and grab some of G-Mom’s cooking. Got to sit in “grandpa’s” chair. Kara took some pictures of me in the car and I am sure they are all over the internet. Kara tells me I have many fans. People get quite excited when they see me on Facebook or this thing called Instagram. I guess I am a celebrity. Whatever. I love you, too, people. I am just enjoying life and keeping Kara in a good mood. That is my mission.

Hope you enjoyed the great pictures from the last few weeks. Felix out. (<——Is that corny? I’ll have to ask Kara.) 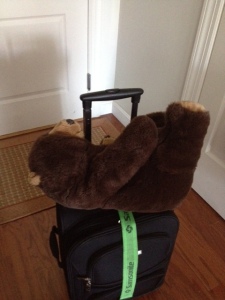